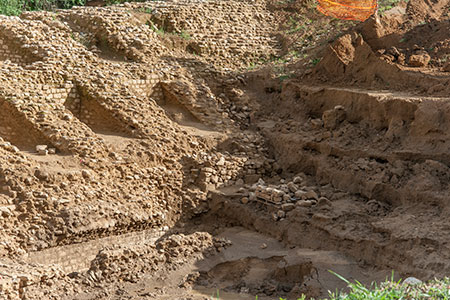 In October 2015, thanks to the financing of the Foundation and the Cassa di Risparmio di Volterra, a large test was carried out which confirmed the first hypothesis of an important show building of which memory had been completely lost. , with three orders, buried at a considerable depth. The arena, in fact, should be located, at the least buried point, at m. – approx. 6 from the ground level and, at the point of greatest burial, at m. – 11 approx.

In May 2016, a second investigation campaign funded by the Ministry was concluded which allowed to acquire data about the real size of the monument, the power of the underground and its conservation conditions. During the campaign, 4 new large essays were opened which made it possible to hypothesize the plan of the entire monument.

The Roman Amphitheater of Volterra, with three tiers of steps, was inserted in the valley that precedes the famous Porta Diana, probably along the route of an ancient Etruscan road, later confirmed by the Cardo of the Roman colony. The power of the underground in the downstream section is undoubtedly remarkable, which can reach up to 8 meters from the ground level. The overall dimensions of the monument are larger than those assumed in the first instance, which would seem to orient towards a structure of about m. 82 x 64. Of particular interest was the discovery, in the last excavated sector, of part of the stairways pertaining to the second order. An excavation, restoration and enhancement project for the monument is currently being defined, which is included in the press as one of the most sensational finds of the century.